We say goodbye to dear Anne

Below is the report that appeared in The Press, York's daily newspaper: 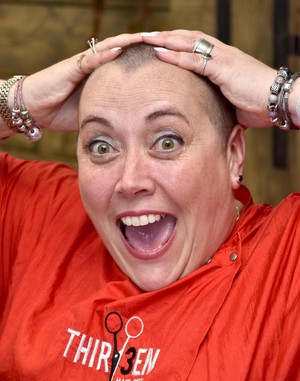 A POPULAR and inspirational former marketing and events manager at the Mansion House in York has died.

She was well known for her work with York’s Lord Mayors - which saw her take a key role in some of the city’s major events - including organising lunch for the Queen when she visited in 2012 and managing the civic party when the Tour de France rolled into York.

Anne served 13 Lord Mayors, was named a Freeman of the City, raised money for charities including York Against Cancer and St Leonard’s Hospice, and won a Community Pride Award.

But she was also well known for her enthusiasm and sense of humour.

Anne’s husband Chris said: “She was an absolutely fantastic woman.”

The couple both had their heads shaved together to raise money for York charities.

He said Anne was always laughing and joking, even with her doctors. And that one of her career highlights was meeting the Queen and the Duke of Edinburgh.

Former Lord Mayor and council leader Ian Gillies praised Anne’s professionalism while she worked at the Mansion House - where she was involved with organisations including York Minster, the armed forces, emergency services and city guilds.

He said: “Anne’s attitude over the past few months in particular in relation to her illness was inspirational. Her smile was infectious, her outlook always optimistic, and she will be sorely missed by her husband, family and friends.”

Cllr Janet Looker served as Lord Mayor when Anne started at the Mansion House and said: “She was tremendous. We were both of us learning on the job and I’ve always felt the Lord Mayors have had the benefit of working with Anne.

“She went over and above the job description. There is no one quite like Anne.”

Anne took early retirement at the age of 46 - and a party was thrown in her honour by former Lord Mayors.

Julie Russell from York Against Cancer said Anne was a “dedicated supporter” of the charity.

She said: “She worked tirelessly for so many City of York Lord Mayors and their fundraising committees, she supported each and every charity in her own charismatic way; always with a kind word and a smile. Anne will be sadly missed by all her friends at York Against Cancer and at this very sad time we would like to pass on our sincere condolences to Anne’s husband Chris, her family and close friends.”

Anne’s friend Kirsten Ovenden added: “Anne was a kind, generous lady, enthusiastic in everything she did.

“She faced her illness with great courage and kept that beautiful smile until the end. I will miss my dear friend greatly, and I know she will be sorely missed by everyone who was lucky enough to know her.”

Graham Bradbury, who worked with Anne organising civic events, said he is “proud and privileged” to have been her friend, saying: “Anne was a tremendous ambassador for the city of York.”

He said: “Anne was a person who lit up any room as soon as she made an entrance. She always lifted people’s spirits with her infectious enthusiasm.

“She had a canny knack of encouraging people to buy raffle or tombola tickets at events in support of numerous local charities, she earned huge respect from so many people and made many friends with her endearing smile.”

“She was professional and her humour, fortitude and kindness will be remembered not only by me but by many organisations with whom she came into contact.”

Cllr Keith Aspden, leader of City of York Council, said: “Anne was well-loved and respected across the city and the support she gave the civic party was invaluable.

“During Anne’s time at the council, she worked enthusiastically and diligently to support 13 different civic parties, including Lord Mayors and Sheriffs, throughout their time in office.

“Anne used her talents and charisma to help them raise huge sums of money for local charities which benefitted many thousands of residents including those who enjoyed the annual Christmas Cheer events.

“Anne will be sadly missed and I send my deepest sympathies to her family and friends.”

Ian Floyd, interim head of paid service at City of York Council, said: “I and the many members of staff who knew Anne and her work are greatly saddened to hear of her death.

“In her 19 years of dedicated service to the council and the city, Anne worked to promote and celebrate the City of York of which she was made a Freeman.

“She held a number of roles in the council and best known was her last one with the civic party at the Mansion House. There she helped raise the profile of the city by working on many important events including welcoming the Queen to York to the York800 celebrations in 2012 and the internationally-important Tour de France in 2014.

“Anne was a very popular and much-admired colleague, and our thoughts and condolences are with her family and her many friends.”

Anne leaves behind her husband Chris, her brothers Paul and John and sister, Mary.